Africa has been quite the experience! I'm kind of bummed I didn't blog about it sooner because now I just have far too much to share. Where do I begin?

Yesterday our group went to the new farm, where the new home for the children is being built, and did quite a bit of manual labor. We moved boulders and tilled the land till our backs gave out and our fingers were blistered and callused. (A sentence that looks very odd to me now that I look back at it. But it's true) it was amazing. It's a very calming and secure feeling to know that you are able to provide a home for these children that they will be proud of. A place they can call there own.

When we had first arrived to the farm, to see the house, we met Irene. Wonderful, saint, amazingly beautiful Irene. I have never met a woman with so much love to give! We walked around the house with her to check out what was being built and how things were coming along. Out of nowhere Irene starts jumping up and down and has the biggest excited smile on her face! She said that she was so thrilled about what was happening. She told us her prayers had finally been answered and said "my children will finally have a home!". I just about burst into tears when I heard the words come out of her mouth.

It still hasn't fully settled in that I am actually in Africa and that we are making such an impact on all 25 of these children's lives. It feels too natural and too easy to provide for these children. If this is really how easy it is to help children in need I don't ever want to stop doing it. 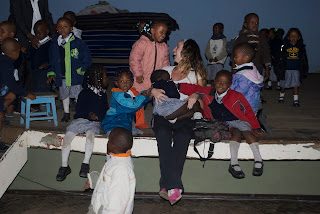 I have never met more deserving children in my life. The amount of love these kids have for everyone els is absolutely unreal! Just pure, unfiltered love that every single one of these children want to share with every person they meet. The first night we met them at the orphanage they all greeted us with open arms. Literally. Most of them just hugged you with a running start or asked to be carried and I had only just seen them all for the first time.

I tend to forget about where these children came from and how they were found because of how much light they bring to my life every day. After talking to Irene, we are finding out different stories about how the children landed in this safe place that she has provided. One boy was found in a river as a new born infant. His mother had thrown him away and he was basically left to drown. He was found later that same day, was taken to St. Ann's and was named Moses. Kamau, a little boy who is about 1 1/2 was brought to St. Ann's due to neglect. He had not been fed for so long that his legs and arms were the width of you little finger, his belly engorged, and his hair had become orange. Irene tells us that he was so mall nourished his body had shut down and was not able to use the food that they were giving him. The children thought he was so scary looking, they didn't want to go near him. That's not even the worst of it.

These children inspire me to be the best that I can be everyday. If all of these children can experience awful events, I could never fathom and still be as happy as they are on a daily basis then.... I don't even know how to finish this sentence because I am just so constantly blown away.
I have been consciously practicing this entire trip, to be able to hold the amount of happiness and love these children carry daily and so naturally. Its sad to know that most of us in the states have more than just about anyone in the entire country of Kenya and yet most of us find it incredibly difficult to be even remotely as happy as these little ones.

I can't wait to wake up tomorrow morning and see there bright shining faces again!

With love from Africa,

Kelsey
Posted by With My Own Two Hands at 10:49 AM

With My Own Two Hands
We are a 501(c)(3) nonprofit organization. We are committed to activating our local communities to start a grassroots movement to bring aid to orphans in South Africa (and other African countries) who have lost their parents to HIV/AIDS. Join our movement for social change! Visit our website www.withmyown2hands.org for more information about us!